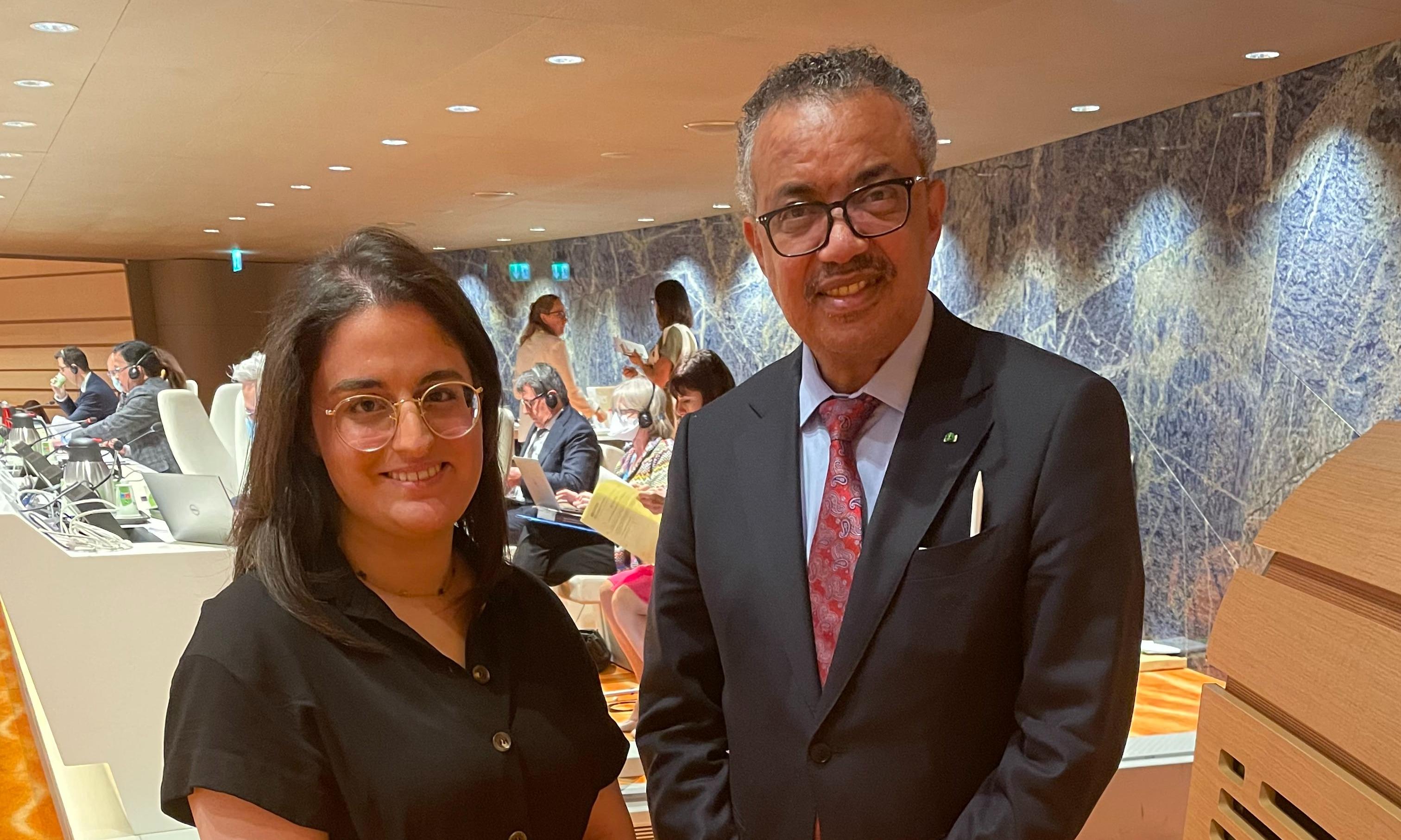 Chagajeg at the World Health Assembly

From 22 to 28 May, I exchanged my scrubs for formal wear and my stethoscope for a microphone, as I left my surgical rotations and joined minister of Health Prof. Dr. Ernst Kuipers and other global health leaders in Geneva as part of this year's Dutch Delegation to the 75th World Health Assembly (WHA) of the World Health Organization (WHO). I linkedin.comheld a statement, interviewed both tiktok.comthe minister of Health as well as tiktok.comWHO's Director-General Dr. Tedros Adhanom Ghebreyesus, listened to and learned from numerous informal and formal negotiations, joined side events, discovered the city of Geneva, and met many, many incredibly inspiring people -- and shared it all on various social media accounts.

The Role of the Youth Delegate during the WHA

As Youth Delegate for the Netherlands, I was selected by the Ministry of Health (Ministerie van Volksgezondheid, Welzijn en Sport), the Ministry of Foreign Affairs (Ministerie van Buitenlandse Zaken) as well as the International Federation of Medical Students Associations - the Netherlands (IFMSA-NL) for two purposes: 1) to inspire and inform -especially young! - people about global health; and 2) to show that young professionals in healthcare have a voice and a say in matters that will affect their (future) work.

Achieving these overarching goals during a high-level meeting such as the WHA requires ‘breaking open’ the idea that such affairs are far removed from a typical medical student’s life. On the contrary, more often than not, matters that are being discussed on a global level don’t trickle, but pour down to the local level in which many of us will be working in the future. To bring global health ‘closer to home’, I teamed up with Isa de Beer, Rijkstrainee for the Dutch Government in Geneva, in creating content for a TikTok account tiktok.com@world.health.zoomers. On this account, we created funny and informative short-form clips, such as highlights of traveling to Geneva, explainers about important topics during the WHA, my contributions to the WHA (such as my statement, see also below) and many, many interviews - with the Dutch Minister of Health, other Youth Delegates, and even the Director-General of the WHO, racking up to 31,9K+ views per video.

However, as Youth Delegate, I aimed to not just be a passive witness, but an active participant of this global event. Some ways in which I achieved this include co-writing statements on behalf of the Netherlands as well as the European region, contributing to formal and informal meetings, and - perhaps most importantly - holding a statement during the formal Assembly. Taking the recent US votes to strike down the landmark Roe v. Wade as a jumping board, I held a statement on the need to safeguard a woman’s right to bodily autonomy and her consequent right to choose for the termination of unwanted pregnancy. In preparation, I collaborated with instagram.comGerman Youth Delegate Anile Tmava on the creation of an international roundtable on Biases in Healthcare before the WHA, which served as fuel for my statement. From the perspective of not only a future doctor, but also a young woman, and a Dutch citizen, I shared how the implementation of mandatory motherhood will affect people like myself both professionally and personally. As such, a stance of zero tolerance for inaction should remain the norm when it comes to the decriminalization and destigmatization of the medical practice of abortions. Fortunately, sharing these personal, professional and evidence-based concerns during the meeting was met with a positive response. Several member states’ delegates from countries like New Zealand, Israel, and Brazil shared their support and congratulations. What’s more, Director-General dr. Tedros as well as Director of Prevention and Response to Sexual Exploitation, Abuse and Harrasment (PRSEAH) Dr. Gamhewage, who were both present during my statement, acknowledged the importance of discussing this matter and even spoke privately with me on the topic afterwards, which was an incredible experience.

I had an unforgettable time during the WHA. The week already started off on a high note, as my flight to Geneva involved sitting in the cockpit of the governmental airplane with none other than the Dutch Minister of Health Ernst Kuipers. Another peak was presenting my statement, and seeing its impact grow from its incredible reception during the meeting itself, to the wave of online views and responses in the weeks following it. Although I wish it had not been necessary to even discuss the relevance of the topic, I am glad that my message resonated with tens of thousands of other youngsters. What’s more, it was an incredible privilege to have in-depth, one-on-one conversations with our Dutch delegation members, Director-General dr. Tedros, Director of PRSEAH dr. Gamhewage, and other global health leaders, all of whom were not only incredibly knowledgeable but also very approachable and down-to-earth, and provided me with countless opportunities to have an unbridled look into the inner workings of the WHO and WHA. Not only was I present during both the informal preparatory meetings and the historic plenary meetings at the WHA (see below), I played an active part in both of them as a member of the Dutch delegation. And during all of this, there was even some time to meet and become friends with other Youth Delegates and enjoy the beautiful city of Geneva, with its striking scenery, excellent cuisine, and wonderful weather. Being able to post about these amazing professional and personal experiences in real time online for other prospective healthcare workers watching from home,was the cherry on top for me.

Some Facts about the Historic 75th WHA

Being the first physical meeting of the WHO since the beginning of the COVID-19 pandemic as well as the invasion of Ukraine, the overarching theme of Health for Peace and Peace for Health was very fitting. Some elements of this year’s meeting marked historic moments for the WHO. To start off, Director-General Dr. Tedros Adhanom Ghebreyesus was re-elected to another five-year term. Usually, such an election is preceded by just one nomination of the person in question for the position. However, Dr. Tedros received a whopping 27 nominations from countries in all six WHO regions, showing a large number of member states in the Assembly’s trust in his past, current, and future leadership. Second, with the aftermaths of the pandemic freshly engraved in our collective mind, scrutinizing the processes underlying preparedness and response to global health emergencies was amongst the top priorities. There were many proposed amendments to the International Health Regulations (IHR), of which only one - shortening the deadline for implementing future amendments - was considered for adoption. Third, as the war in Ukraine caused restricted access to healthcare, especially caused by the attacks on Ukrainian health care facilities, this too became a global health topic to discuss at the Assembly. A majority vote at the Assembly led to the official condemnation of Russia’s military aggression against the country, with the resolution even hinting at the possibility of suspending Russia’s voting privileges in the future. A counter-resolution by Russia, which discussed the health emergencies in Ukraine without alluding to their cause, was not accepted. Fourth, a historic decision was made regarding sustainable financing for the WHO, as member states agreed to increase their assessed contributions from 16 to 50% of the base budget by 2030, making the flow of income for the WHO much more predictable and less dependant on voluntary contributions. As the final agenda point of the Assembly, and after hours of formal and informal debate over the use of certain sexual health terminology and definitions of target populations, which were deemed controversial by some member states, multiple voting procedures were needed to hammer out an agreement with regards to the global strategy on HIV, Hepatitis B and STIs.

Listen Back and Keep posted!

Listen to linkedin.comChagajeg’s statement at the 75th World Health Assembly (WHA) Meeting of the World Health Organization (WHO)!

If you are interested in knowing what (else) our Youth Delegate is working on, or has worked on, and if you would like to keep updated on when the application process for the new Youth Delegate starts, make sure to follow the social media accounts here; or send an email to youthdelegate@ifmsa.nl: